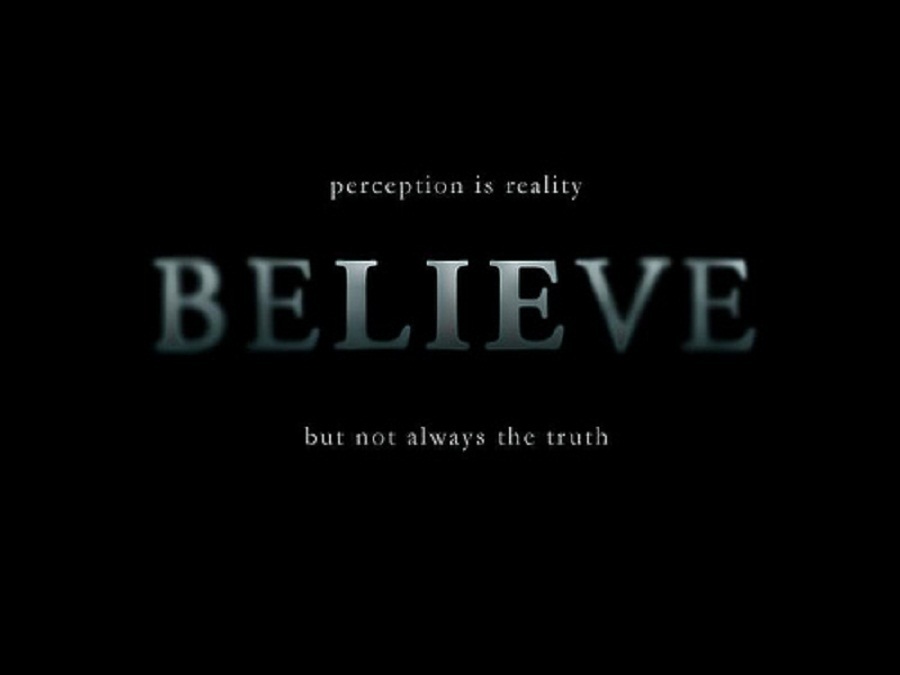 Perception can very quickly become reality. If that statement is true then a false statement can be presented as truth and perceived as reality. A person's perception of reality does not necessarily allocate truth. Truth is based in the minds acceptance of its consistency. Truth is always consistent but the perception of it is not. The approach to one's truth is in his/her grounds for deciphering realization. Each individual exist as a storehouse of information acquired from a multitude of experiences Perception then is an influential balance between an individual's mentality and reality.

"People only see what they are prepared to see."
-- Ralph Waldo Emerson

What we think is true becomes reality in our experience.

A few years ago gas prices skyrocketed to four dollars a gallon. There was no bases for the rise in price but the public believed there was a shortage and panic set in which triggered high demand and increased prices. So, a false rumor can influence perception and change reality. Then, what we believe denotes our reality, not truth.

Truth is in itself not enough to form a perception. One must have faith that truth is consistent and therefore, reliable. Faith is a realization and knowing of an existence either in the present or future. We have faith that a bridge will not collapse so we cross it without concern. We also can have faith in future events because we know in our minds they will happen. Now faith is the substance of things hoped for, the evidence of things not seen. In any case, faith has a great part in the forming of perception.

Faith must be optimistic yet preserve the morals of the individual.
We are then a mixture of materialist who perceive history as stepping stones and spiritualist who perceive history as a divine design. The concepts of one are as real to one as the other. Each are set in the perception that there is truth in faith. Neither uses logic and reason to extrapolate truth from theories of the unknown. When engaging concepts and theories one must retain a certain moralistic position. It is in the morals of the individual that certainty and faith becomes personal. Everyone can have faith in crossing the bridge but only those who have faith in the unknown can experience a reality of inner meaning.

In order to explain this basis of thinking, one must first consider one's position. Obviously, understanding plays a great part in perceiving the basics for comprehending the experiences in life. If life is only a perception then what is that not perceived? I cannot form a conclusion of that which I don't know or experience. An event taking place in your presence is no more significant than that being experienced around the world, because that which is not experienced is impossible to observe.

Perception of reality can be divided into three categories: possibility, actuality, and illusion.

1. Possibility is the probability of that which can happen. We change possibility through our association with it. Our perception is our view as we experience the event. Our senses, culture, morals, and values; determine our psychological outlook.

2. Actuality is that which we experience in real time. It is our environment as well as our certainties and uncertainties that bear on our perspective.


3. Illusion is false information that influences our thinking process and has the ability to bend reality.


Though complex, that which is proven contains the potential nature to become reality within the mind. In the end, one's mind is the decipherer of all that forms reality.

Perception of reality or acceptance of conditions.
Perception is than, a confrontation between our mind and truth -- a balance between the two. As such, it is a mixture of sensations, concepts and truths of external environment and internal influences.