Here is the radio program you have heard so much about; the one-hour radio broadcast by Orson Welles that panicked much of America, "The War of the Worlds by H.G. Wells." (Note: The audio clears up after the first ten seconds.) 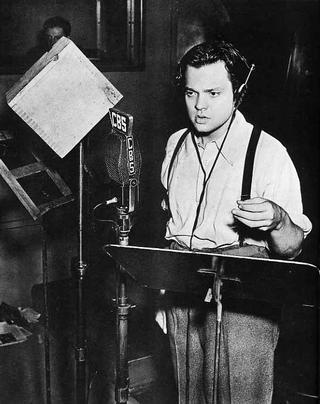 Broadcast on October 30, 1938, the program depicts the landing of Martians on Earth and their aggression toward Earth's inhabitants along the east coast of the United States. It is a vivid doomsday scenario which struck terror in the hearts of those who did not recognize it as a Halloween prank by CBS's, "The Mercury Theatre on the Air."

Although CBS issued disclaimers earlier that day the broadcast, delivered quite convincingly by Welles, still had the unintended effect of causing a public panic. At the beginning of part five, CBS is heard announcing that the program is "an original dramatization of 'The War of the Worlds by H.G. Wells.' The performance will continue after a brief intermission." Many people simply did not understand that they were listening to a radio performance intended for their entertainment.

The Night America Trembled 1957 is probably one of the best films I have seen that proves, at least to me, the point that Americans have always been gun happy freaked out paranoid hicks. And thats why I love them, and this movie. The Night America Trembled is-as far as I know-the first movie of the events that happened during the radio broadcast of Orsen Wells doing H.G. Wells' War of the Worlds on October 30, 1938. Oddly enough Orsen Wells is never actually mentioned by name in this flick.

Bad blood still I guess. Anyway, Newsman Edward R. Murrow adds modern perspective to '50s audiences about subsequent events that make this Orson Welles production still seem frightening to anyone who didn't hear the beginning of the broadcast having switched from Bergin and McCarthy on NBC. I first saw the remake "The Night that Panicked America" when I was just a little Lush I couldn't believe how realistic it sounded. I thought myself it was a brilliant joke. In this original movie however the director of the radio play and Orson Welles are depicted as two different people when they were actually one and the same. Also, the sound of the Martians' opening their ship was visualized as the sound man manually spinning a bare record turntable when it was actually the opening of a jar. (The remake shows this magnificently) What makes this Version best though are the Westinghouse commercials with John Cameron Swazee for various nuclear products! Also worth mentioning are the early performances of Warren Beatty, Ed Asner, Warren Oates, James Coburn, Vincent Gardenia, and, for Honeymooners fans, Frank Marth! It was remade in 1975 as The Night That Panicked America which is also a brilliant film.

Tags: hg wells, the war of the worlds, the night america trembled
Email me when people reply –
Follow